I bought 6′ of square tubing with the intention to slide it over the existing legs to make longer legs.

A friend of mine has a machine shop, so I took the tubing over there and he cut it to my measurements.

At lunchtime today, I went back over to his shop and we cut the legs down to a more reasonable height. I wanted to be able to open the built-in cubbies on the floor, so it had to be at least that tall. We got the legs measured, leveled, and cut.

After work, I went by True Value and picked up some self-tapping screws so I could attach the slide-over legs to the original legs. (I’d originally considered tack welding them, but I don’t have a welder, so I figured this way would work just fine)

My neighbor has a drill press and let me use it to drill through the thicker stock. 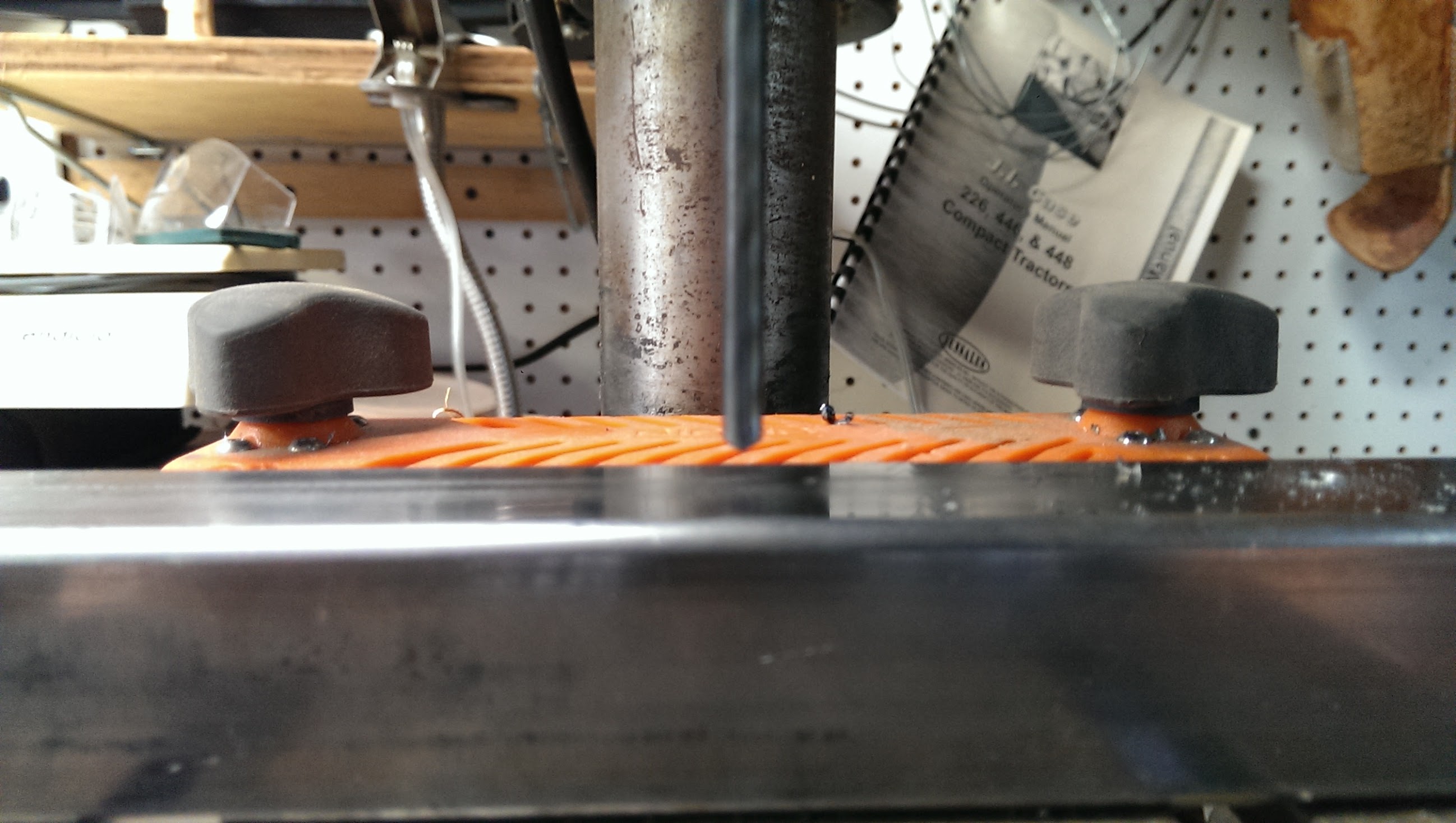 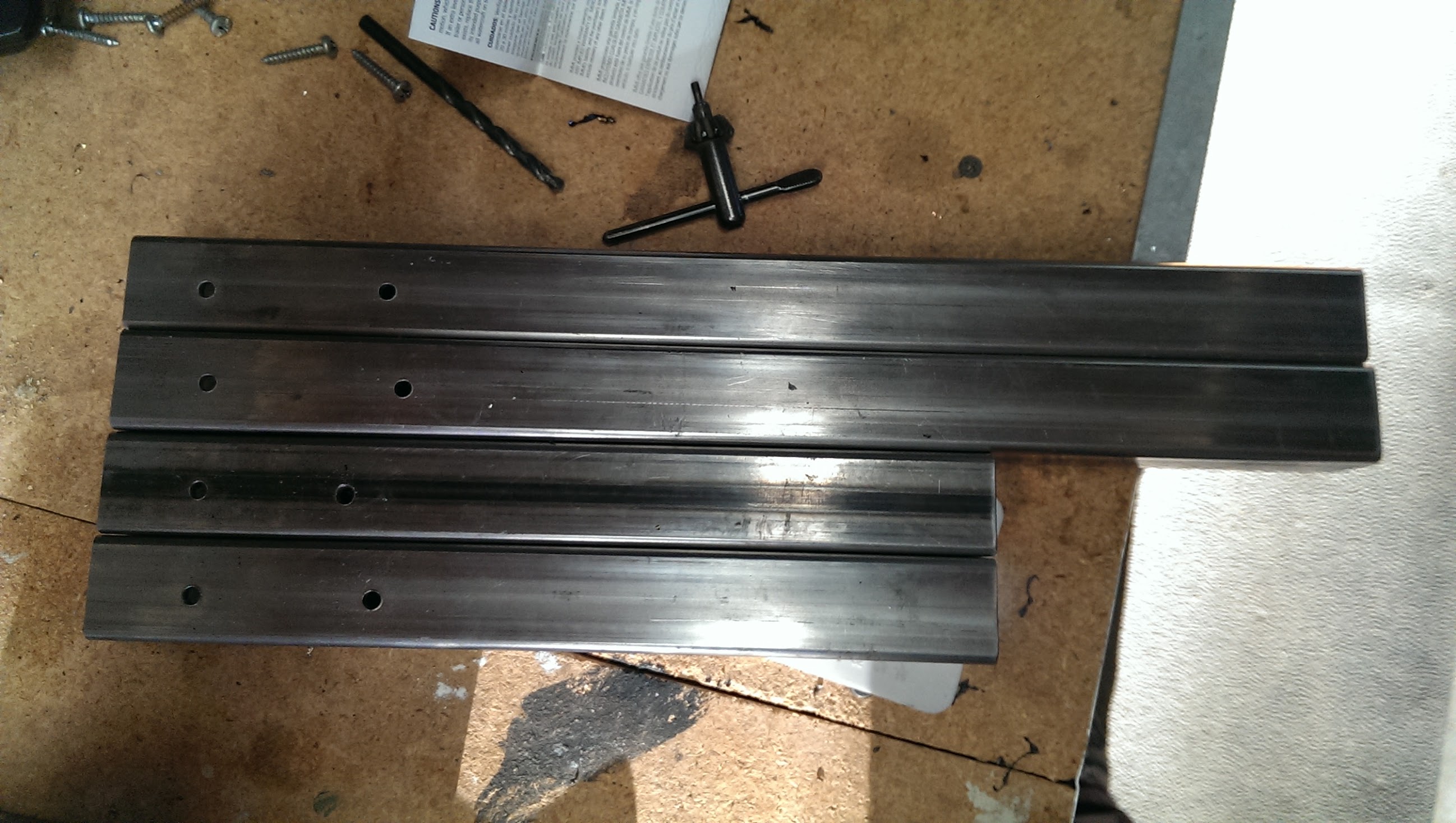 I slid the slightly larger legs over 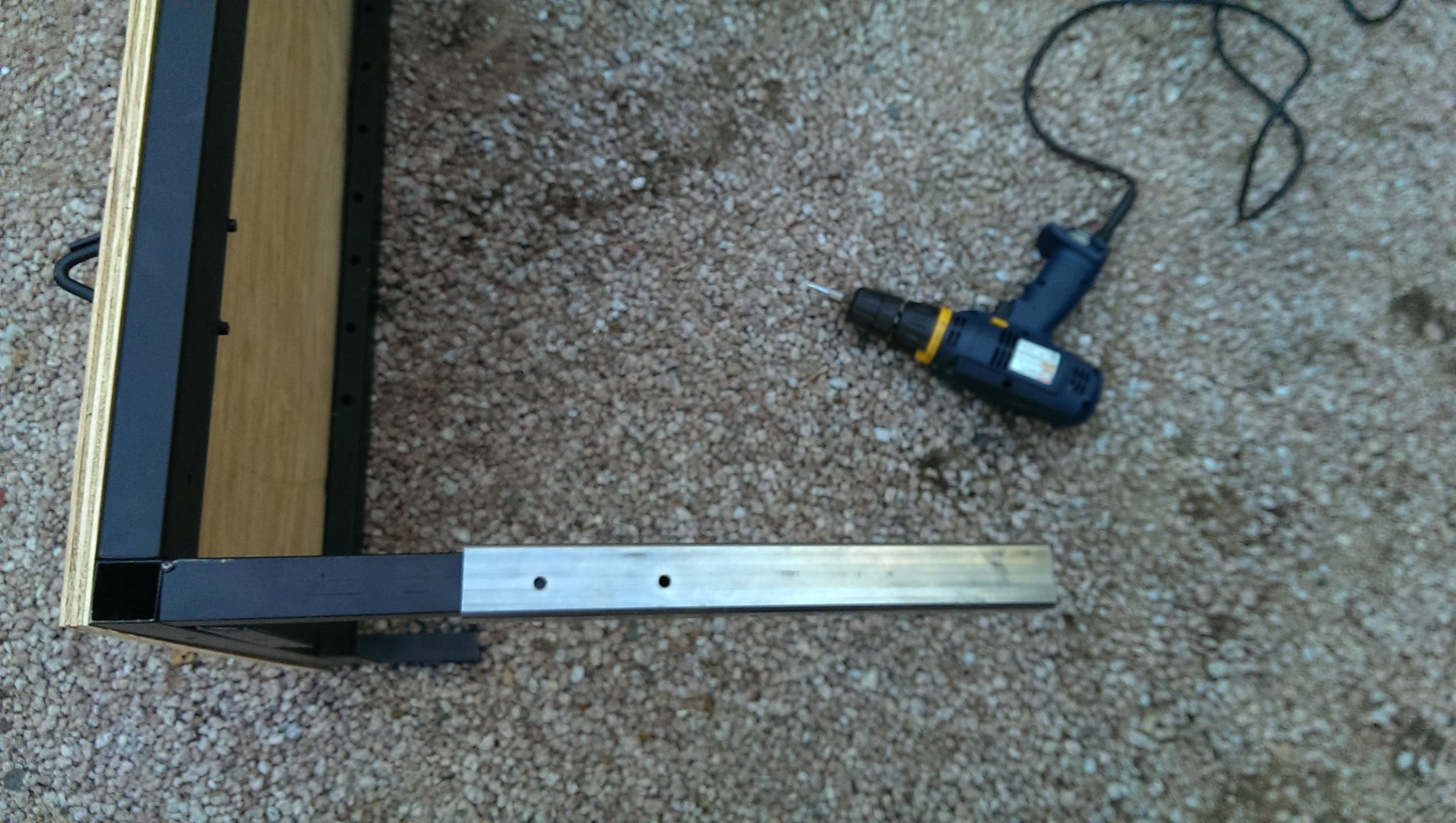 and got them all screwed in 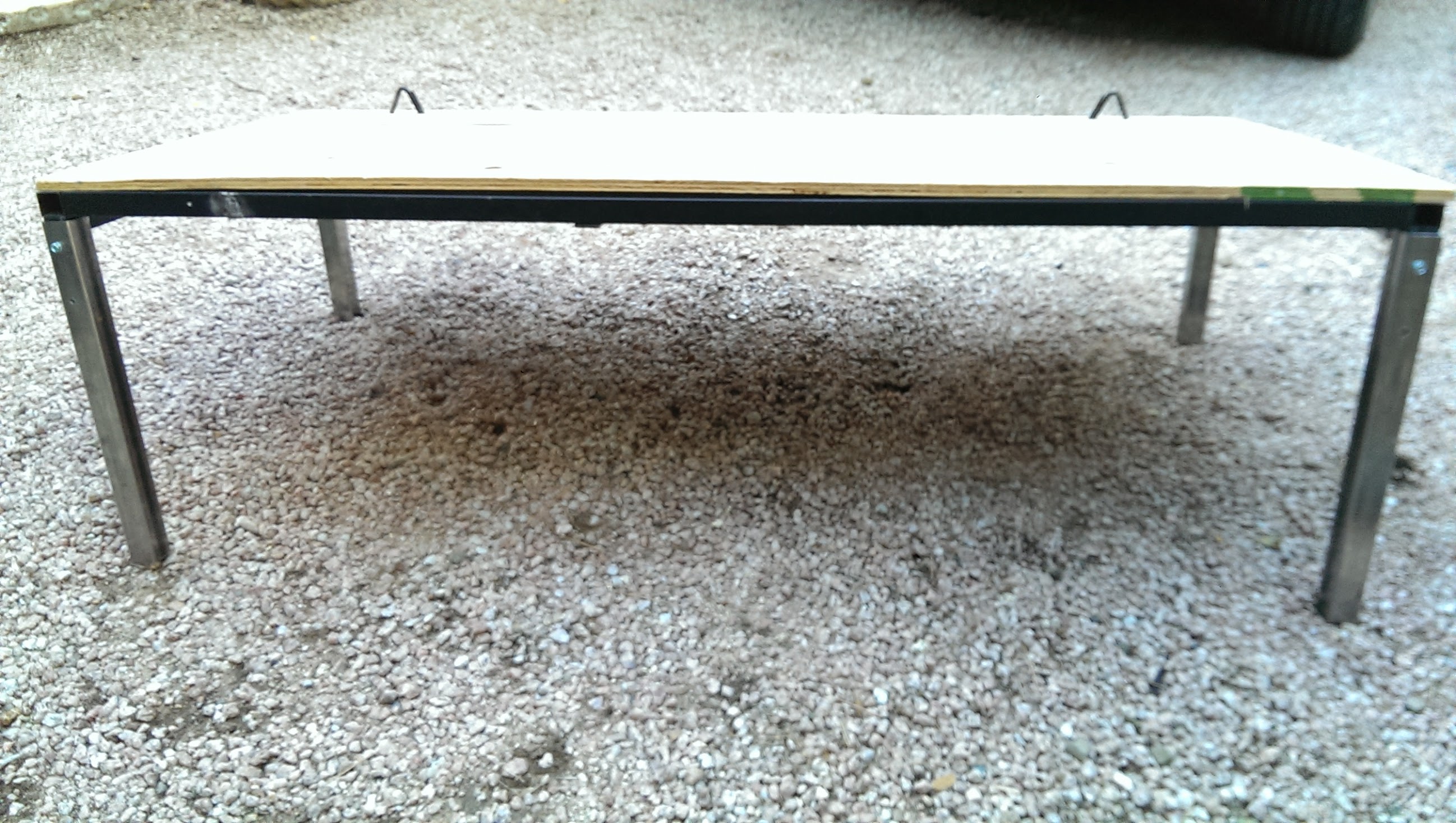 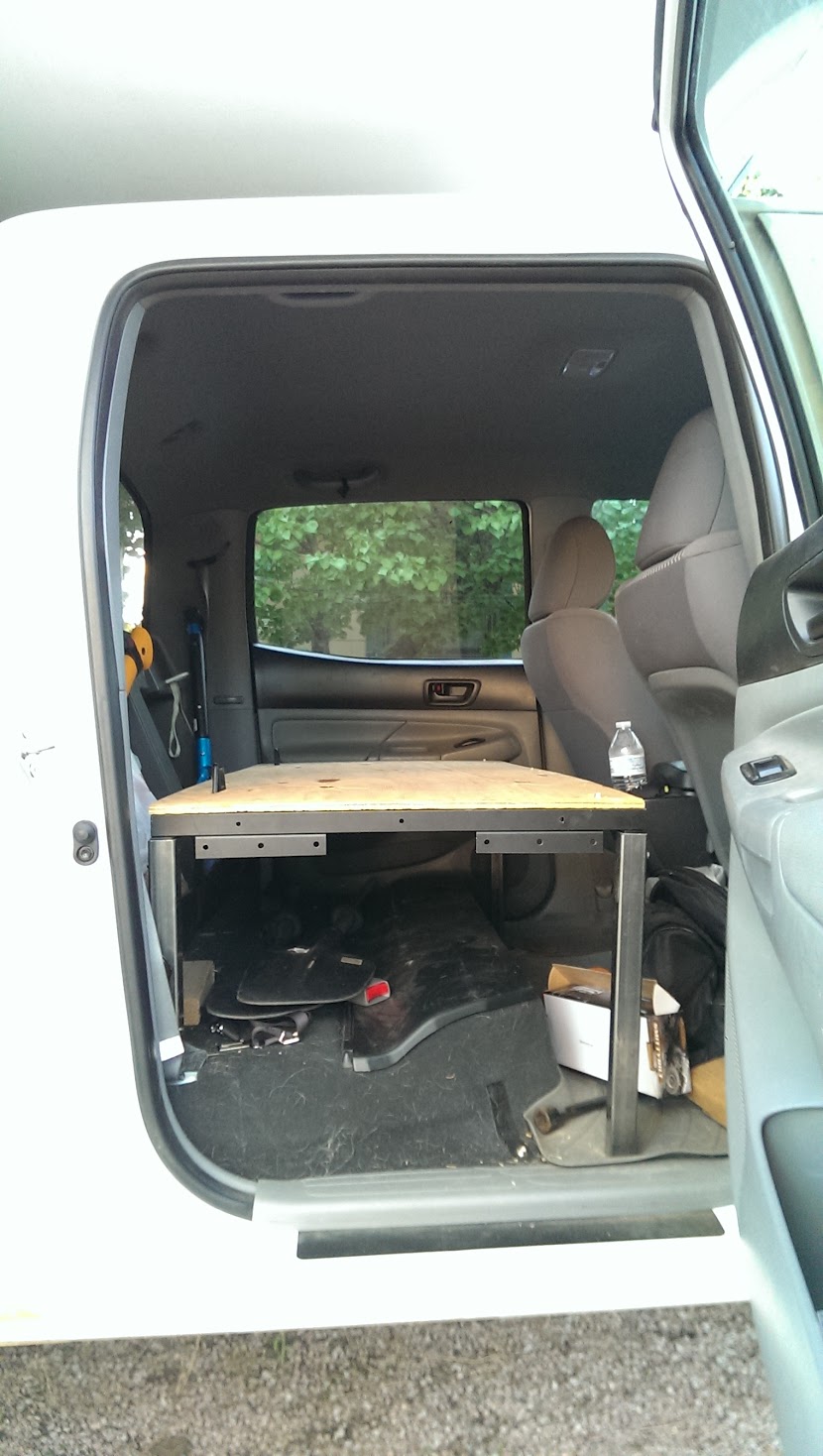 Since I can store a lot of stuff under the platform, I think that instead of using the quite heavy metal cabinet, but instead get a plastic foot-locker (on sale at True Value) for the random things. 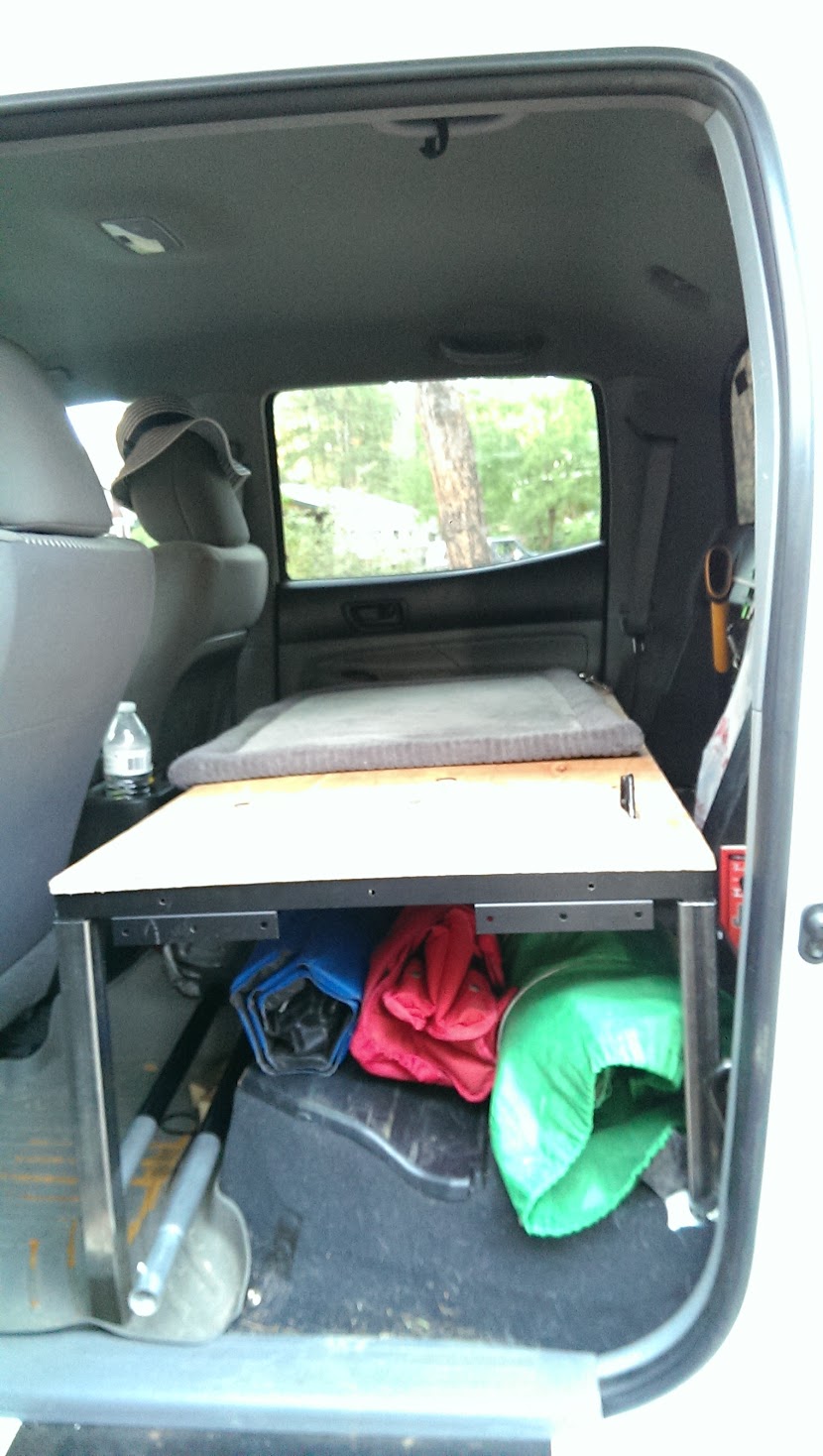 If you remember, a couple of months ago, I took out the rear seats of my Tacoma double-cab and made a platform. (write-up here: http://wp.me/pfR3J-QB )

I was nervous about potentially being decapitated by flying folding chairs or kayak paddles if in an accident, so I started looking for some kind of drawer or large container for the loose chairs and rolled-up table and kayak paddles and levelers and all that stuff.

Last week at work, someone left a rolly cart in our department.

I measured it and it was a perfect fit for my truck needs! Checked with my boss and took it home the next day. It had big casters, an odd metal hook-like piece hanging on the bottom,

and about 12″ tall metal side jutting up. I’d need to cut those off before it’d fit on the platform.

When I got home that night, I took the casters off, borrowed a friend’s angle grinder and got to work.

Cut the bottom piece off first. Then I cut the top piece off.

With a little convincing, those two pieces pulled out of inserts. I cleaned it up and rolled it back into the garage.

The next day, I bought 6′ of 1 1/4″ square tubing. I need to measure how tall this cabinet is, which will determine how high I can make the platform. The tubing is just the right size to slide over the existing legs of the platform. I’ll want to tack weld them in place probably.

I still need to get some self-tapping metal screws to affix the wood top to the metal base of the platform. And I’ll need to mark and drill the wood to attach the box to the platform (can use the existing bolts from the casters, maybe just affix two per since there are 16 total – 4 per caster)

I still want to find some way to secure the platform to the truck itself, but if this cart is secure to the platform, it’ll be a pretty solid set-up.

Since I got my FWC on my truck, I’ve been wanting a better way to pack my gear in the truck (and travel with the dogs)

A month ago or so, I took the rear seats out and have been researching platform ideas. I found a lot of great photos and started to plan.

My ultimate goal was economy of cost and a functional and secure platform.

I was planning to just take some plywood for a top, and some 2x4s for legs. One night a couple of weeks ago, I found this metal frame in an alley, and decided to use it. It’ll definitely give me a stronger backbone than just plywood. 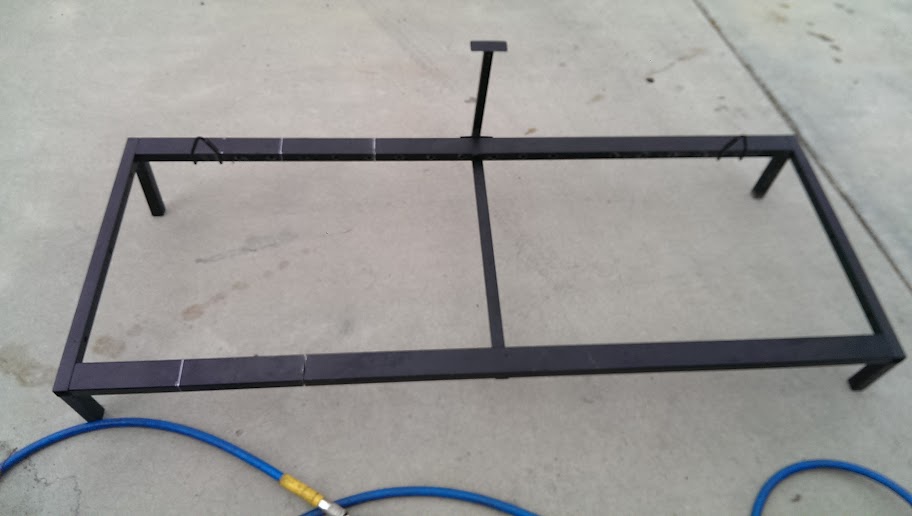 The only problem was that it was about 6″ too wide and so it stuck out the truck door. That wasn’t going to work.

A friend had a cut-off wheel and mig welder, so I borrowed his tools and set to work.

Got the extraneous pieces cut out. 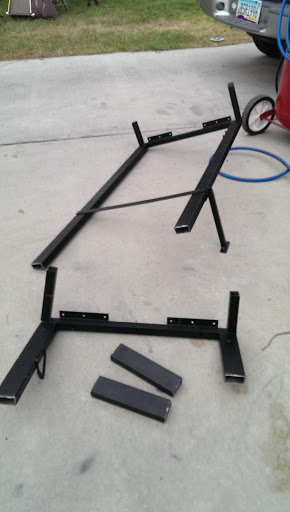 and it was time to do some hoopty welding.
There are no photos of my wields because I’m terribly out of practice and my beads were rather ugly.
I did have at least one good run tho 😉 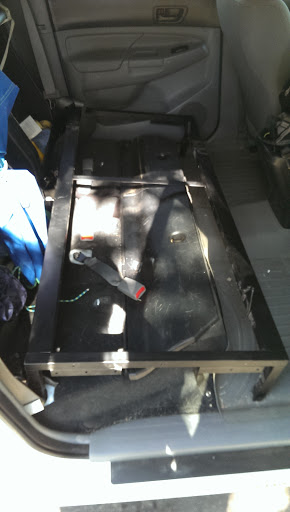 Yesterday, I went to Home Depot, picked out some 1/2″ plywood, and had them cut it to size there (what a great service! Woot!)

You can see those triangle tabs sticking up on the frame? I left those on to use as tie-down points for whatever stuff I pack in there, but it meant that I needed to cut some holes in the wood top for them to fit through.

After my grandpa died in 2001, I got his red Craftsman toolbox and some of his tools, including his old jigsaw. 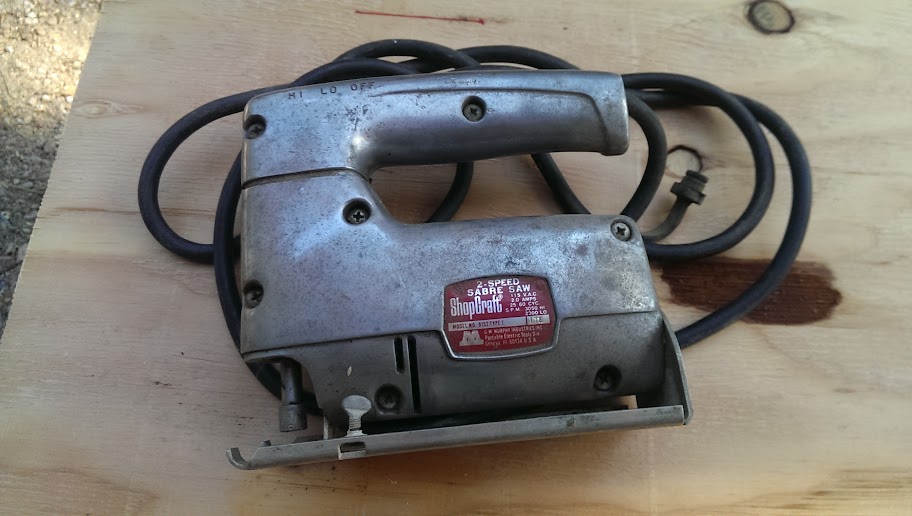 Unfortunately, somewhere over the years, the set-screw got cross-threaded, so the damn blades wouldn’t stay in and kept stripping out. I got some cuts done before the cussing commenced, then the impatience set in and I took a rather large drill bit to the cut.

That left me with some rather ugly areas and it still wasn’t wide enough. 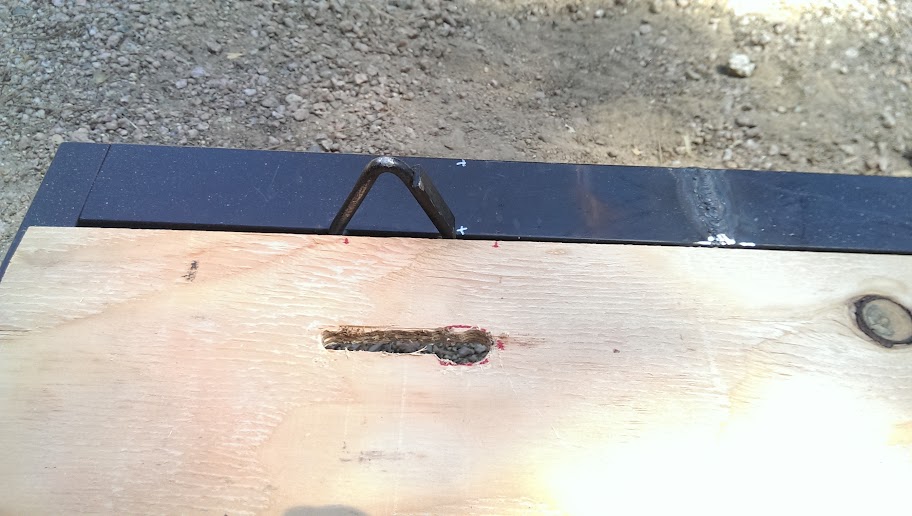 I sent a friend a text message and luckily, he had a brand new Black and Decker I could use! Yay!

Bing, bang, boom! Zippo, Presto! Had it done in just a couple of minutes.
Still ugly, but functional. I’m okay with that. 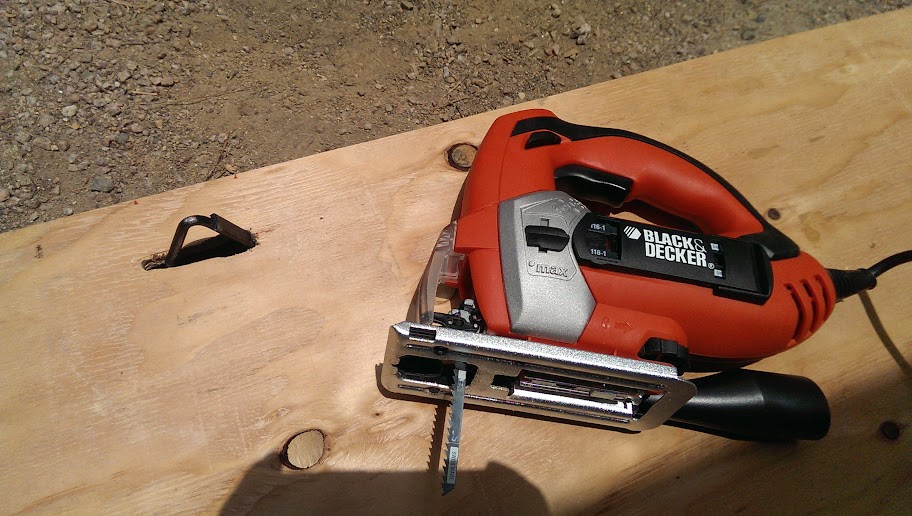 The guy at Home Depot had recommended I use a piano hinge for this to give me a more solid and less flexy movement. Seemed like a good idea… 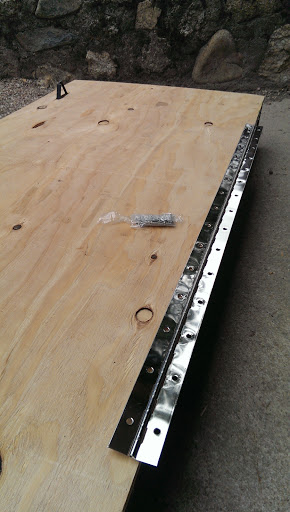 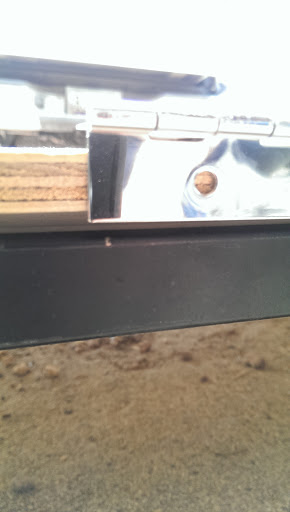 Back to Home Depot to get some different hinges. I got a three pack and quickly discovered that the screws were too long for the top (went through the wood, and pushed up against the metal) and that I didn’t have the right drill bit to make starter holes for the screws in the metal of the platform.

Fergeddabouddit. It was getting too hot to be working outside anymore anyway, so I decided to do hinges later. I do want to put them in though so that I can have decent access to the built-in cubbies on the floor.

(please pardon the dirty – got this pic right after I took the first seat out. Built in cubbies: ) 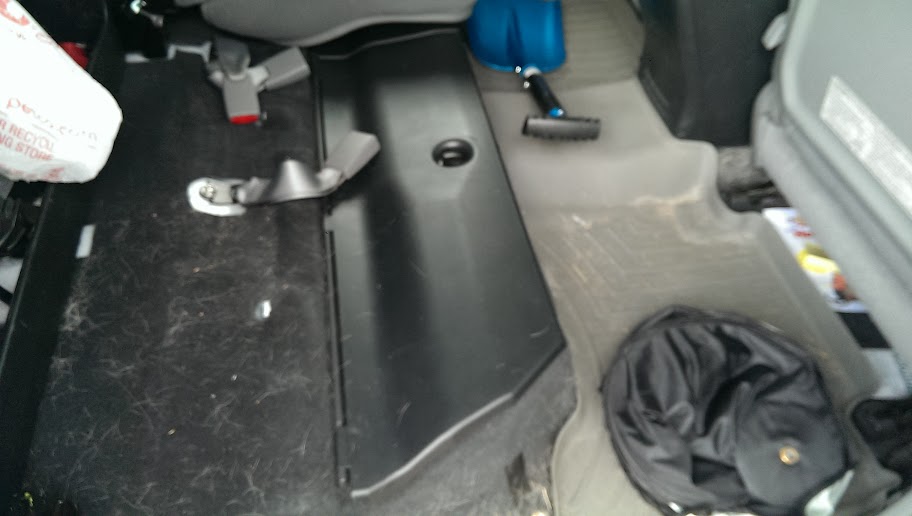 So I got the platform set in the truck 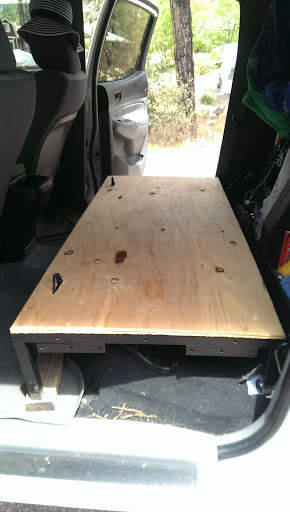 and put my stuff back in. 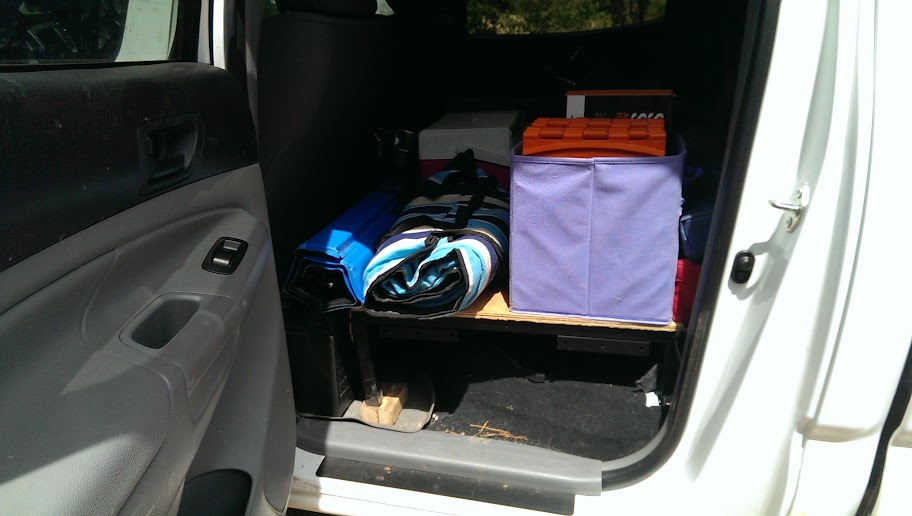 A few things I want to do:

– I need to get a better drill bit to make holes in the metal part for the hinge screws
– I’d like to cover the wood with some cloth for splinter avoidance
– A better way to bolster the frame legs other than pieces of 2×4
– Vaguely considering making an upper shelf so things aren’t just stacked up and I can utilize the space more efficiently.
– Need to figure out a good way to secure the platform to the truck and ‘stuff’ to the platform
(I’m paranoid about getting into an accident and having stuff flying about inside. Saw a video in EMT class years ago about an unseatbelted back seat person who bounced around the car in an accident and killed the other three people. Eep)

Cayuse suggested I put thin closed cell foam for the top of the wood before I put the fabric cover on to make it more comfy for Argos doggie. That’s a good idea because then I don’t have to deal with the clumsy dog bed back there.

When I took the seats out, I left the outside mounts in. I can use those as mounting points for the platform but have to figure out how, exactly. I’m thinking zip-ties won’t do the trick. (Also, should have a mount forward too for better anchor of everything….) 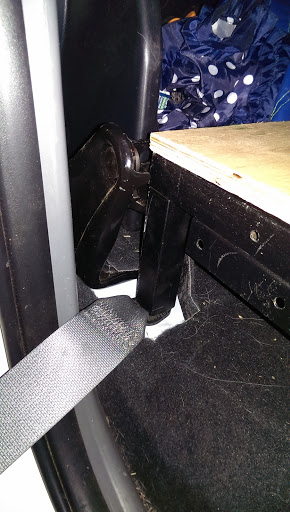 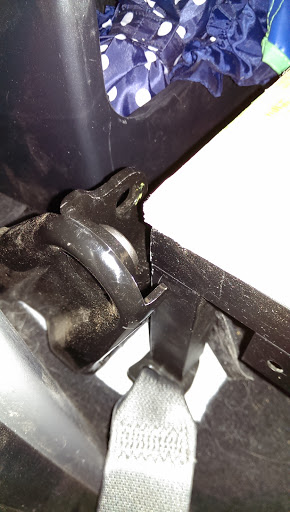 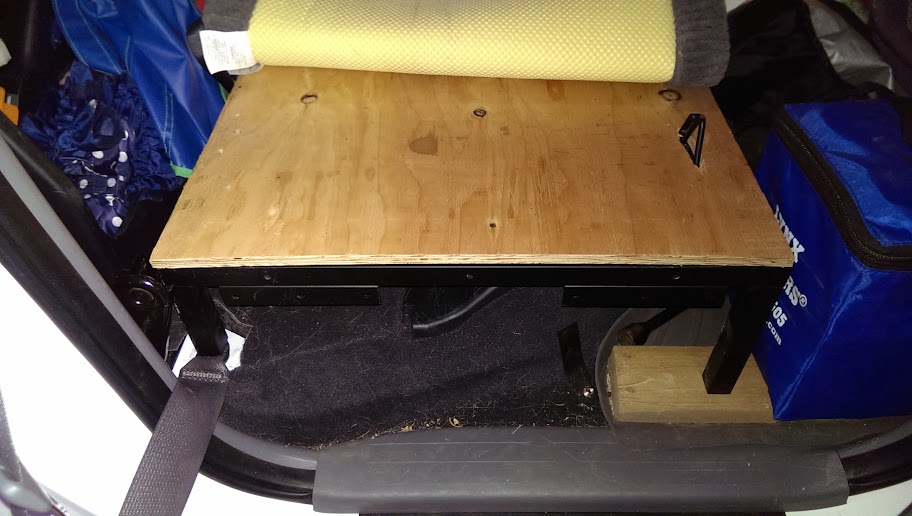