Lately, I’ve been thinking about moving. Oh, I’m not going to go anywhere (most likely), but this line of thinking stirs up frequently in my head. It is a familiar refrain. I realized today that when I was younger I had a sort-of self identifier of “I move. It’s what I do.”

I moved frequently growing up, and then continued that trend into my adult life. For many years I had a ritual of listening to Bowie’s “Ziggy Stardust” while packing. Now when I hear it, I get a strong desire to dip back into the unknown.

There is a feeling I always get when packing my stuff up for a move. Most of the moves I’ve made have been to cities I’ve never even visited. Leaving is a looking forward to the possibilities. I don’t know what is next, and that is exciting. I’ve always loved that feeling and it is part of what drives me to make those big changes. The idea of what might be out there is so much better than the present reality (even if the present is pretty okay), that I take that leap into the unfamiliar.

A bunch of years ago I made a promise to myself that I wouldn’t move /from/ anymore, but I would only move if I had some compelling reason to move /to/. This requires me to not pack up and get in my car and drive drive drive when that GO feeling tightens my chest. It also means that when I consider the idea of changing locations, I have to really look and see if I am moving towards a better possible future, or moving away from some frustration or disappointment.

As they say in business, “location is everything.”
How do you know if the location you live is right for you?

I’ve been missing my dad this past week or so and I just now figured out why. Of course. It’s Holiday Season…with all the talk of family get-togethers and such. And this is one of the first years in many that my mom’s side of the family hasn’t done a good Thanksgiving gathering.

But when I really think about holiday family gatherings and my dad, I have to admit that he was usually an ass. He had a tenuous relationship with his family – they were all very close, but he was considered (or perhaps moreso considered himself) the black sheep of the family. So, as tends to happen during these festivities, they were often fraught with difficulties.

I remember one Christmas in New York with my dad’s family where he taught me how to pour him a proper drink (2-3 fingers full with a couplea ice cubes) and we played hours of Atari. That was great for me, but in retrospect, it was rather rude of him.

There was a Christmas where he came to Illinois to have the holiday with my mom and grandparents. I think we were having a big extended family get-together that year. It was the one and only time we did that. Dad was drinking a lot and was rather unpleasant. Nothing terrible, just not fun to be around. He spent a fair amount of time alone in the basement drinking and smoking cigarettes and being rather anti-social and surly. My mom was furious. I was young and just knew that dad wasn’t being a good guest and kept trying to keep him entertained.

When you are a kid, you think that adults have things figured out. That somewhere along the line they realized how to live life. But as you grow older, at some point not only do you realize that your parents were just flying by the seat of their pants, but suddenly you are in your late thirties or forties and realize you don’t know jack…and here you are a full-fledged “adult”.

I don’t know if that realization frightened me or just made me kind of sad.

The knowledge that my dad didn’t know shit and was just doing the best he could, well, I guess it sucks when you realize that your folks are human. Humans are fallible and have the ability to fuck things up. When you are a kid, you see your parents as more than human (and not like the White Zombie song, although I have met some ‘rents who might fit that category. Maybe there really are replicants running around posing as humans. But I digress) and when you realize that they are just plain ole’ people it can be disappointing. What have we to look forward to if we are just going to grow up into staying plain ole’ people? I was kinda hoping to grow up and become one of those infallible “adults.”

With the excellent help from my friend Pete, we got the pesky things apart. 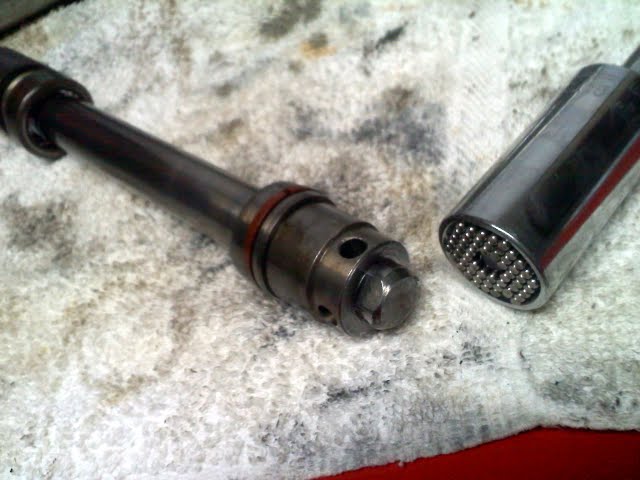 The fork seals proved to be a bit of a pain, and ended up needing basicially a crowbar to pry them out. Finally, pop! out they came. 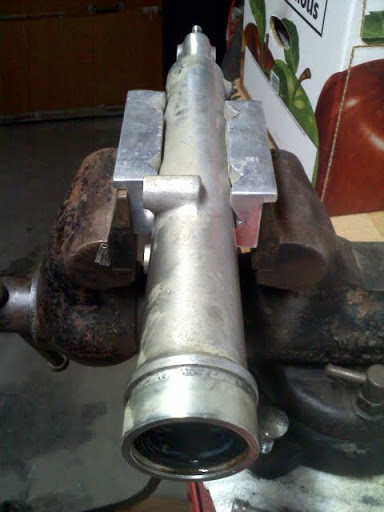 A fantastic thing to do when taking things apart is take photos of them so you know how to put them back together. Threw everything into the parts washer for a cleanin’ 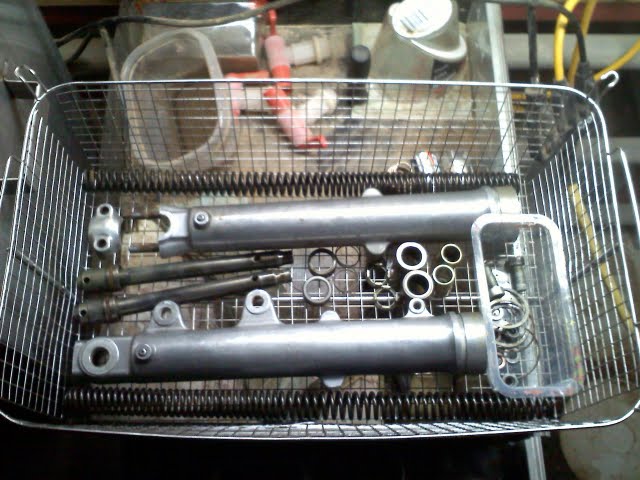 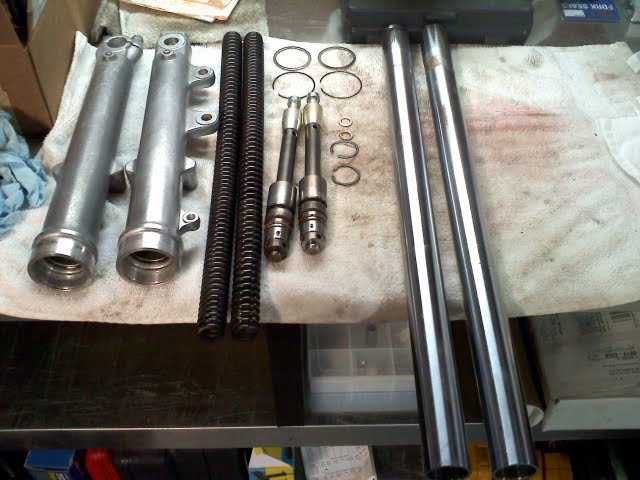 Now, to paint the lowers and put it all back together.
Hopefully, I’ll paint them today (maybe tomorrow) and then put the forks back together in a few days. Yay!