Got them put back together yesterday. Just used the existing bushings and one of the tubes wasn’t too happy to go back together. Got it, but couldn’t get the fork seals installed. This afternoon, I went to a friend who has a fork seal driver kit 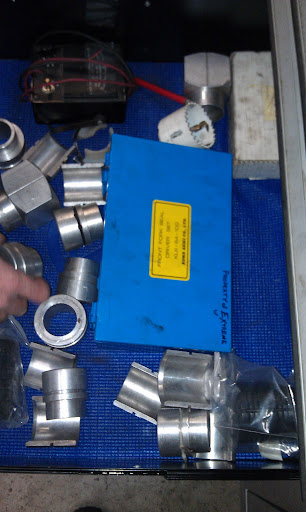 They were not wanting to install. Tough buggers. 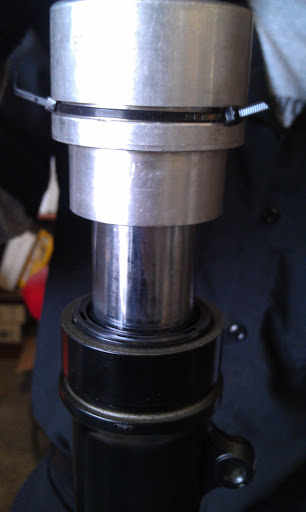 We got them about flush with the top of the lower tube, but not sunk down enough to put the retaining clip in.
Feh.

So, my search for a decent (and cheap) front end continues.

My dad wrote me this story many years ago. It’s sort of a variation on Pinocchio.

The Puppet Who Did
by Terry Roberts

Once upon a time about two hundred years ago in a place called Italy, lived an old puppeteer named Guido. Much more famous than the old puppeteer was his puppet, Punch.

Punch was a much loved puppet in Italy, particularly among the children. Punch would sing and dance, tell stories, play comedy or drama. When Punch was funny, waves of laughter would sweep across an audience. When Punch was sad, the earth would be muddy with tears. People loved and believed in Punch.

Guido and Punch would travel the length and breadth of Italy. They would perform in fields or in barns, wherever there was an audience. Guido would set up a little stage and the back-drop behind which he hid, pull the strings and Punch would spring to life. The show would begin.

In each town and village people would wait with joy for the arrival of Punch, their beloved puppet who could perform so well. For Punch did perform well, he danced with grace and sang like a bird. He seemed to be able to express more feeling than any one human being.

Each year there was a large and wondrous festival in Naples. The highlight of the festival was, of course, Punch. People would travel to Naples from all over Italy just to see and enjoy Punch. For as Punch came alive, he brought them alive with laughter, and tears, and joy.

The evening before the festival a terrible thing happened. Guido had set up the stage, and curtains and back-drop and placed Punch on stage. Just as Guido finished working, he felt a terrible pain and tears streamed down his cheek. He came to his old companion to talk, “Punch, I am very, very old and it is my time to go, and I cannot take you with me. Now I must return to the mountains, to my people, to where I was born. It is my great sorrow that I shall miss the festival and that there may be no show for the children. I have watched you perform your magic at the end of my strings for many years and I have come to believe in you. Maybe it is asking the impossible, but a dying man has the right to believe as he chooses. Maybe, my friend, you could do a little something for the children tomorrow. After all they have always loved and believed in you. Goodbye my friend.” and Guido cut the strings that had always held Punch. Guido turned from Punch and walked toward the mountains. Had he turned a little less quickly he would not have missed seeing the tear that trickled down Punch’s cheek.

The next morning the fairgrounds were alive with people. And already people were seating themselves in front of the Punch stage. Children always sat in the front.

Punch lay behind the curtains deep in thought. “I’ve always performed at the end of Guido’s strings. A string would go up and so a foot or arm. It was Guido’s voice that sang, not mine.” And he thought some more, “But I have done the singing and dancing and acting for so long and all these people in me. They believe in me, Punch. I can do it, I can do it, if I can think and I can care, which I do, then I can stand, I can perform, I can do it…”

Suddenly Punch yelled out, “I don’t need no strings!” and at the sound of his own voice he leaped up and the curtain parted. Punch sang to the audience, “Do you believe in me?” And both children and grown-ups yelled back “YES!” And Punch said, “Well, I believe in me too!” and the people laughed with joy and Punch went on to perform the most wondrous show of his career, for without being attached to strings, there was even more he could do.

From there Punch went on to become one of the best and most loved Commedia performers of all of Italy. (Commedia de’llarte was a kind of theater performed in Italy then).

Every once in a while someone would notice little pieces of string hanging from Punch and ask about them. Punch would reply, “At one time I was very hung up, but that was a long time ago.” And if the questioner didn’t turn away too fast, he would notice a tear trickle down Punch’s cheek.