Maybe it’s because I spent so much time joking that I’d get stuck in Helsinki that it had to happen. (I still like saying “Helsinki”)There was some cargo door issue with my flight from Chicago, and we were delayed about an hour which caused me to miss my connecting flight in Helsinki to Warsaw. By 20 minutes. Because it’s Sunday, there are fewer flights. My original flight took off from here at 09:15am. The next one to Warsaw isn’t until 18:05 (6:05pm)

My disclaimer here is that even though I did sleep some on the flight, I’m pretty burned out feeling. So if my sentences sometimes don’t make sense…that’s why.

Upon arrival, I had to go through a passport check. It had a very German “papers please” feeling. Of course, maybe it seemed moreso because of my impending tours.

The travel desk told me (can’t remember the proper name) that the only next flight to Warsaw isn’t until 18:05 – seven hours from my arrival at Helsinki Airport. American Airlines gave me a €15 (euro=around $20) voucher (to be used in one sitting) and an internet phone coin so I could call my mom who was waiting for me at the Warsaw airport.

After walking back and forth in front of numerous gift shops, a cafe, and asking a number of people where this elusive internet phone was, I finally gave up and bought a sim card and little gsm cell phone. Only cost me around $70usd.
So, I called my mom.

There are “vartija” (guards) walking around the airport. They look characteristically
militant. Perhaps I don’t spend enough time at airports, because I am still not used to seeing such militant security. I flew a lot  when I was younger and there wasn’t such a militaristic presence. I suppose I shouldn’t be so surprised. It’s the world we live in now.

This airport is chilly. I put a sweater on under my fleecy and I’m still cold. Of course, those of you who know me, know that I am easily chilled. At least I’m fed.

The cafe only has pastries and coffee and I wanted real food. Something more substantial. I went upstairs to the restaurant and had a delicious salad. Since I had to use the voucher at one sitting, I got the pricey salad (15euro), a coffee and a bottled water.

The salad was delicious. Shrimps, artichoke hearts, local fresh made cheese (I had one cube), watermelon slices, lettuce, sun-dried tomatoes, homemade yogurt with herb dressing, and baguette.
And coffee. 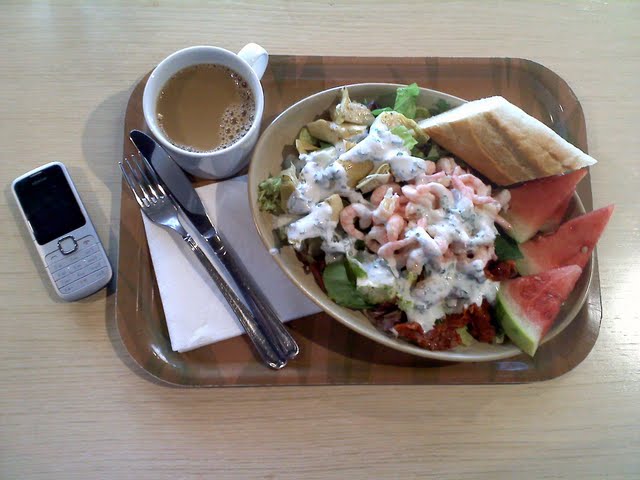 I need more coffee. I wish they had little nappy-time cubbyholes like I’ve read they have in Japan.

This is my first time in a place that isn’t predominantly English speaking. The airport loudspeaker first makes announcements in Finnish, then in English (albeit with a heavy accent). Most of the workers at the kiosks and little shops speak English, if not all that well.

When I first tried to use my new phone to call my mom, I got a recording. I could make out when it suggested I press a number to do something, but it was all in Finnish. I went back to the shop from where I bought the phone and the nice man who had originally helped me took the phone and went through the recording settings and got it set up for me. Then I was finally able to call my mom.

At least the airport has free wi-fi.

There are little differences I keep noticing. The lifts are small – actually reminiscent of the elevator in my aunt’s old apartment building in Manhattan except instead of ancient and rickety, and noisy, these are modern, clean, and smooth. But about the same two-person capacity.

I do like all the different accents and languages I overhear. Of course, I suppose you get that with most international terminals.

If I cared more about fashion, I”d definitely start dressing more European. Of course, the women’s styles while good-looking, aren’t terribly motorcycle-funcational. Hey, a girl’s gotta have her priorities.

There is good people watching from my cafe seat. I just wish I could warm up. I pulled out a sweater from my bag. Now I have a t-shirt, sweater and fleecy zip-up and I’m still cold.

I was trying to get my VoIP Google Voice international work-around GrooVeIP to work but so far no good. Feh. Yay technology. I like the idea of shutting off and traveling quieter, but when things like a flight delay happen and I don’t have a way to contact my mom at the connecting end, I need to be plugged in.

Ah, Madonna. “Holiday” is playing overhead. In Helsinki.
Things are so different, are they?

3 thoughts on “stuck in Helsinki”